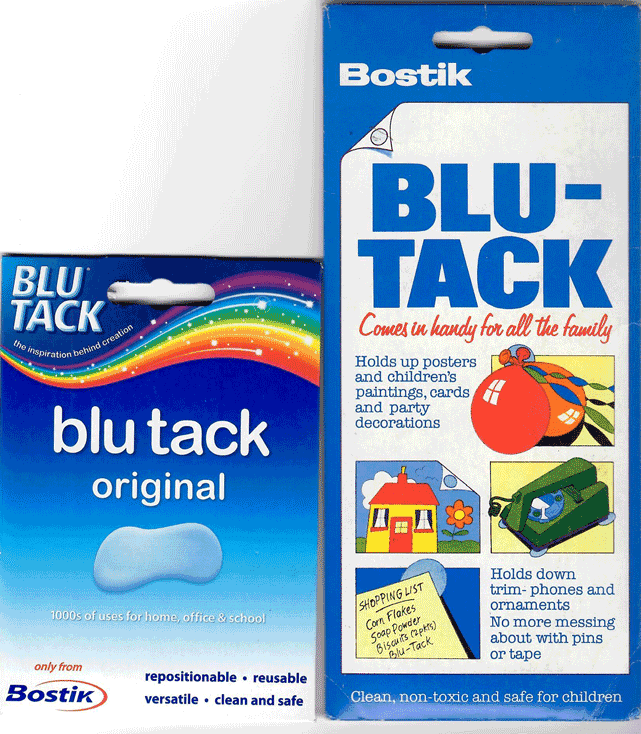 “It’s not like it used to be.” You hear it said quite often, especially by those old folk (like us). This used to describe such things as the food we eat, people’s manners and buses being on time. Well people’s taste buds change more often than they think, yes people are getting ruder and more ignorant. Especially when I’m driving and they just don’t get out of my way. Idiots.  How dare they? Oh and buses are actually still pretty much on time. Well it can’t all be bad.

Another thing people gripe about is the size of things. Such comments as: –

“I remember when Wagon Wheels (the chocolate biscuit) were as big as your head when I was a kid.”

Well they could have been, you were a lot smaller then and so was your head. I know with some people it’s hard to imagine their head being smaller than it is now. Perhaps that’s just my opinion.

Recently I was confronted with absolute proof that things aren’t as big as they used to be. Blu Tack. Yes that magical stuff is handy in all sorts of situations and I remember half of my bedroom being held together with the stuff when I was much much younger. For a long time now I’ve had my comic and art book collection in storage. It was well overdue for being sorted and to see just what kind of state they were in since I saw them last. Which was before I got married. Yes that was sometime ago.

While carefully digging through and reading the odd one of two. I was quite surprised to see that pretty much everything was still in good condition. Everything was still sealed in plastic bags. But between a couple of books was an old friend. A packet of Blu Tack and, only three-quarters used. What a find. Of course I had only just bought a pack a month or two before. Typical. But when I placed them side by side the difference was very clear.

I don’t know exactly how old the one on the right is, but the reference to Trim-phones places it in the early Eighties if not Seventies. Yes I’ve been holding onto that one for a while.

But the real measure of what you got then and what you get now can be found inside. Not only is the older one wider and taller but thicker as well. Yes OK I know talking about Blu Tack is more than a little strange, but in this case there’s a principal. It shows that companies have cut the size of things you used to remember of the products you used everyday. What a difference three decades makes.

If anybody else has anything like this, please let me know. 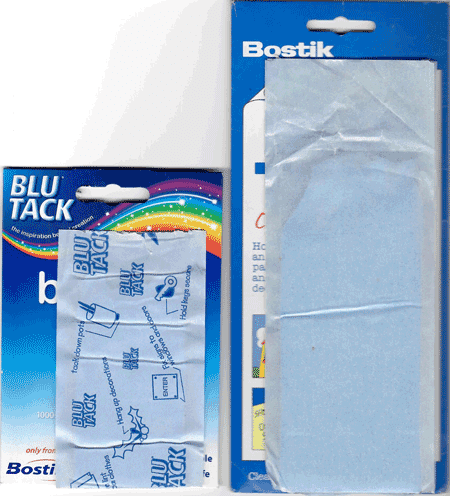 Category: Gripe Corner
Tags: Blu Tack, Its Not Like It Used To Be